When you spend your whole childhood in one place, you grow up believing the foods you eat and traditions you celebrate are the norm for children everywhere.  It wasn’t until I graduated from high school and went to college across the country with people from everywhere that I came to realize we did A LOT of things different in San Antonio, Texas.  The contrast was starker still when I married a Yankee from New England and moved to Connecticut!  While I didn’t ride a horse to school, wear cowboy boots everyday, or have cactus in my front yard (yes, people asked me those things!), there were many childhood treasures I quickly learned I had taken for granted.  How do children grow up in a world without Blue Bell ice cream, Big Red soda, tamales on Christmas Eve, the Rodeo every February, and most of all, cascarones at Easter, Fiesta and every school festival? 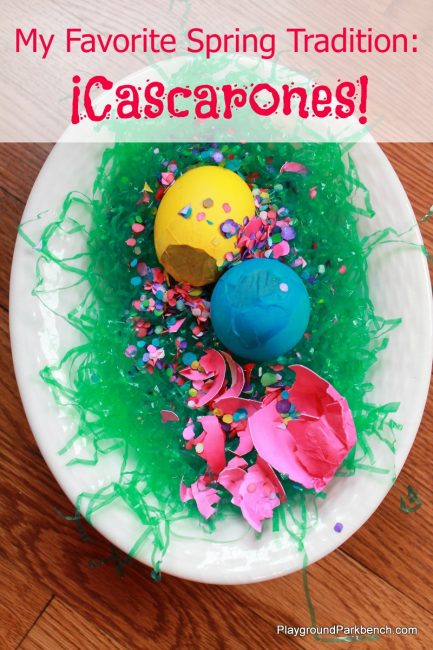 Cascarones is the plural of cascarón, which in Spanish means eggshell.  Across the Southwest, and most prevalent during Fiesta de San Antonio each April, cascarones are emptied eggshells, which are then cleaned, dried and brightly decorated, and finally filled with confetti and resealed with tissue paper.  During celebrations, party-goers crack the eggs over each other, raining colorful confetti all over the recipient.

Being cracked with a cascarón is supposed to bring good luck and is considered a sign of affection!  I have many fond childhood memories of chasing friends and cousins with them on Easter, during Fiesta and at various school festivals.

Cascarones allegedly originated in China, where they were filled with powders.  The explorer, Marco Polo, brought them back to Italy, along with the piñata,  in the late 13th century.  During the Italian Renaissance, gentlemen filled the empty eggshells with perfumes and scented powders and gave them as gifts to their beloveds.  Making surprise-filled eggs eventually traveled from Italy, to Austria, France and eventually Spain.

The Spanish Emperor Maximilian’s wife, Carlota, introduced the eggs to Mexico in the 1860s, where the expensive perfumes were eventually replaced with more affordable confetti, and took the current name, cascarones.  In Mexico, they are post prevalent during Carneval, the celebratory period before Lent.

While cascarones fell out of favor over the years in Mexico, the tradition was revived with gusto in South Texas in the 1960s with a Chicano cultural revival, and as a part of Fiesta celebrations which continue today.  Fiesta is a 10-day citywide party in San Antonio that commemorates when Texas won its independence from Mexico by defeating Santa Ana at the Battle of San Jacinto on April 21, 1836.  Fiesta begins the Friday before April 21st and continues on through the following weekend, with a packed schedule of parades, neighborhood festivals, carnivals, Fiesta royalty and more.  Fiesta officially commences each year with the cracking of a cascarone!

Last year, the girls and I made it home for Fiesta week, which also happened to coincide with Easter.  Big M got her first taste of cascarones, and couldn’t get enough!

In South Texas, and much of the Southwest, cascarones have also become commonplace during Easter.  Eggs have been a symbol of rebirth for centuries, and adopted by Christians as a symbol of Jesus’ resurrection.  The cascarone, when cracked open, is representative of Jesus’ empty tomb, and the confetti a celebration of his life and rebirth.

While prevalent in San Antonio for Easter and Fiesta, growing up, cascarones were also commonplace at all our school festivals and fundraisers.  Every year, I remember bringing in empty eggshells my mom had carefully cracked, rinsed and dried.  Volunteers would then color the eggs, fill them with confetti and seal them to sell during the school festival to raise money for the school.  My Dad used to always make us comb our hair out in the driveway when we got home, so we didn’t drag confetti all over the house!  The truth is they make for great fun at any celebratory event.

When my husband and I got married in San Antonio, most of his family and friends from the Northeast, and many of our college friends from all over, had never heard of cascarones.  My family helped me make literally hundreds of them for the wedding weekend!  Instead of dying them like Easter eggs, we spray painted them with floral paint, and spent an evening around my Grandparent’s dining room table filling them with confetti and sealing them with tissue paper.  We filled glass vases with them as centerpieces for our rehearsal dinner at La Margarita, a famous Mexican restaurant downtown, and included them in all the out-of-towner gift bags at the hotels.

While eggshells are fragile, they can sometimes be stubborn, and with enough force, inflict some pain on the recipient’s head.  Cascarón etiquette dictates you actually crush the egg in your hand above the person’s head, then let the confetti rain down, as opposed to smashing the whole egg on their head.  And of course, if you receive, you should be sure to exact your revenge.  Oh, and if you happen to be in South Texas, do not embarrass yourself by calling them confetti eggs – they are, and always will be, cascarones!

How to Make Cascarones

If you live in San Antonio, you can buy cascarones just about anywhere, especially during the Spring, and year-round at El Mercado, the Mexican market downtown.  You can buy a dozen for $2-3.  But for those of us living in regions where most have never heard of these fun confetti-filled eggs, you likely have to make your own.

Cost: Less than $5
Prep Time: Several days to collect shells, dry them, and allow to dry after coloring as well
Clean-Up Time: Less than 15 minutes

First, you have to properly crack your eggs to preserve the shells.  Instead of cracking them down the middle, tap just the top 1/4 or 1/3 of the egg open, draining out the inside.  Rinse out your shells with warm, soapy water and allow them to completely dry.  You can save them in an empty carton until you have a full dozen or as many as you plan to make (note, they go far faster than they take to make!).

You can color your cascarones just as you would Easter eggs – dye them, or, since you won’t be eating them, it is safe to use faster methods, like floral spray paint.  Once the decorations have dried, you can fill them with confetti, or a more eco-friendly option, birdseed.  Then, place a light line of glue around the top of the opening, and seal the egg shut with a square of tissue paper!  Confession – these cascarones were mailed to me by my sweet cousin who still lives in San Antonio.  We will be making our own too, just as soon as I collect enough shells!

I had hoped to celebrate the beginning of Spring today by letting the girls go to town with these cascarones outside… but mother nature had other plans and sent us 3″ of snow, which is still falling.  Maybe for Easter?!?

[…] throughout the Southwestern United States during Easter and spring Fiestas!  Learn more about what cascarones are and how to make them from Playground […]

[…] Confetti- Check out how to make cascarones and fill them with confetti here! […]

[…] What fun Easter traditions do you celebrate?  If you enjoyed this post, be sure to check out Cascarones – My Favorite Easter Tradition and all my Easter posts here.  You can find all of these on my Easter posts on Pinterest, as […]

[…] do you decorate for the Spring season? If you enjoyed this post, be sure to check our my favorite Easter tradition – Cascarones, as well as great non-candy ideas for Preschool Easter Baskets. You can find all of these, as well […]

[…] wanted to tell the world the news!  If you’ve been following me for a while, you know that cascarones are my favorite Spring tradition.  And since I didn’t make it home for Fiesta this year, I’ve been going through […]

[…] My personal favorite Easter basket filler – ¡Cascarones!  Instead of candy-filled eggs, offer real egg shells full of fun… to learn more about what cascarones are and how to make them, read our post here. […]

This sounds like a super fun activity for the little ones at Easter. Thanks for sharing 🙂 #weloveweekends

I enjoyed reading the history on this. Looks like a whole lot of fun.

It was fun learning about it myself! I never knew any of it as a kid – they are definitely a lot of fun. I still love them in my 30s!

Now through Black Friday, save 30% off sitewide and let your little one unwrap the learning this holiday! Use code GIFT30 to save. You'll find Learning Resources toys all over our playroom shelves.

50% off all STEAM Kids ebooks

60% off First Month of KiwiCo - Any Line

KiwiCo, the makers of Kiwi Crate, and now Cricket, Koala, Doodle and Tinker Crates for different ages and interest, is offering 60% off the first month of any crate, for any line you choose. Offer ends 11/28.

For Gift Ideas (or YOU)

Start your custom curated monthly wine subscription service with Winc. Bottles start at just $13 each, and 4 bottles a month gets you FREE shipping. Save $25 off your first Winc box with code HOLIDAY25 from 11/22 - 11/29/2017.

Shop Beautycounter this weekend get the last of their amazing holiday sets and give the gift of safer beauty this holiday (don't miss the Clean Slate Charcoal Duo, the perfect stocking stuffer for the man in your life, and the Winter Jewels Palette for glowy holiday looks!). Shop with me, and I will reimburse shipping and send a special gift for all orders over $150 placed by 11/30.

Save 70% off premium canvas prints and 60% off everything else! Use Code: DoorbusterAff I get all my family photos made into canvases now by Canvas on Demand, and they are GORGEOUS! Saves on framing too!

Organize Your Life with Cozi

Get Cozi, the #1 organizing app for families, and get our 2017 Printable HOLIDAY PLANNERS - all for FREE! Three kids, two different schools, dance schedules, tee ball schedules, doctor visits, my editorial calendar... this is how I keep my life together. Sign up is FREE!