What Are Book Clubs Reading Before Election Day?

They say it is bad form to discuss money, politics and religion in public… But they also say if you don’t heed history, you are doomed to repeat it. So what are book clubs reading before next month’s Election Day? Mom’s Book Nook is talking political and historical fiction this month! 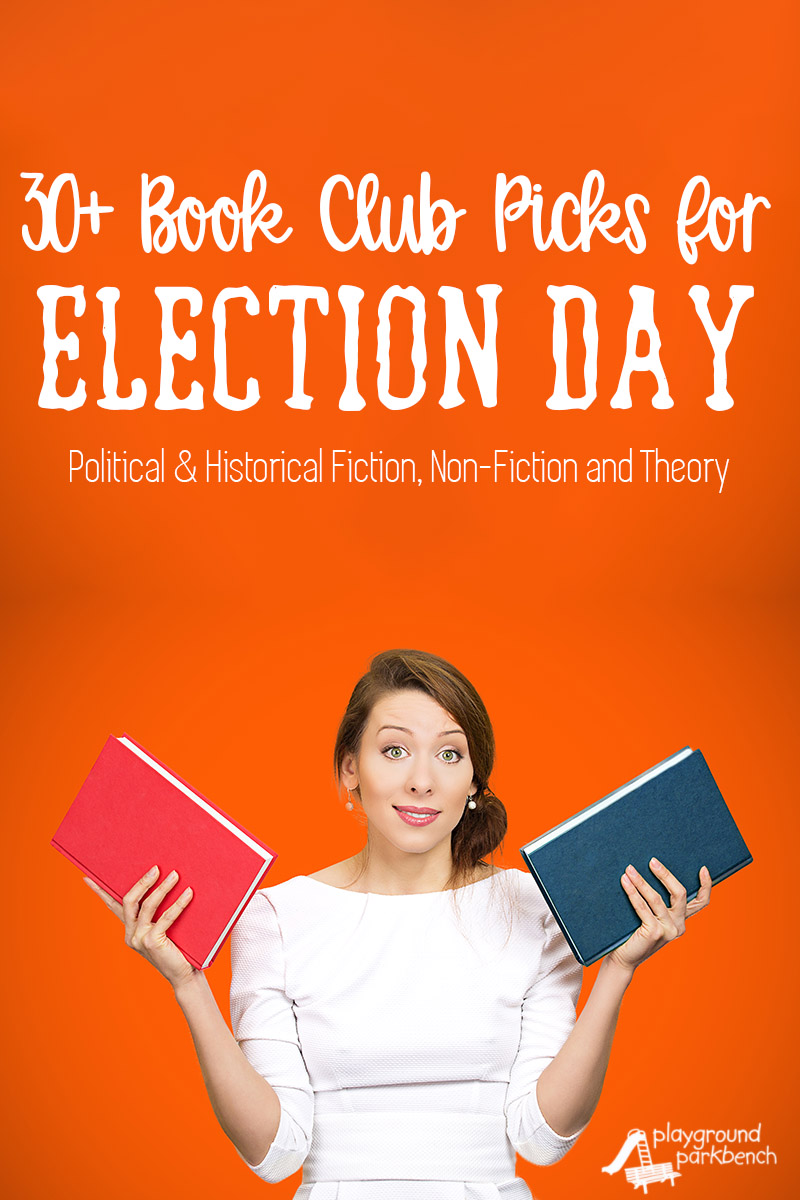 In just one month, we head to the polls for arguably one of the craziest Presidential elections in our country’s history… or is it? What better forum to talk politics than a group of well-read women? The best part of leaning political in book club is you can leave Donald and Hillary out of the discussion entirely, and talk fictional (or historical) political candidates based on this awesome collection of historical, political fiction. In some cases, political non-fiction is so incredulous you’d think it’s fiction – and we have a few of those on the list as well.

It’s no secret that I am a HUGE historical fiction fan – there’s something about reading a story set against the backdrop of historical realities that bring both into vivid life. You could argue that nearly all historical fiction carries a political bent. Any story set during periods of war or civil unrest, not just those featuring an election or political candidate, inherently address politics and the views of the day.

These picks make for amazing book club selections because you can talk about so much more than just the characters and basic storyline.  You might even learn a little history that was overlooked in your high school curriculum.

Sometimes, the best way to convey your political views is by telling a story. I like to think of political allegories as the grown-up version of Aesop’s fables. These author’s seek (or sought) to warn us about the future given the implications of the present day. Can you read between the lines?

You may have read some or all of these in high school – I guarantee if you read them again today, you will understand them so much better today than you ever did as a teenager.

History is full of events you would think are too unbelievable to be true, and yet there are cycles in history which repeat themselves over and over again. It is important to study and understand the circumstances around major historic events so that we learn from the past (ancient and recent), and don’t repeat its mistakes.  These are a few of my favorites… and even if you don’t love Bill O’Reilly’s politics, I promise his Killing series is well worth reading.

The Most Influential Books About Politics Ever Written

And if you really want get academic and actually discuss political theory, these are the books and political works that define politics. They are quoted, referenced, and in some cases, were the texts that informed our Founding Fathers in establishing what they wanted for our country (as well as what they didn’t). If you want to be informed in politics, this is where to begin.

From the great list above, our pick this month for Mom’s Book Nook is Stephen King’s 11/22/63.  Believe it or not – it’s not a horror story.  I know – I was shocked Stephen King wrote outside the genre too… this book has come up repeatedly during our ‘what should we read next’ discussions, and we always pass it over because of its length. But with Election Day coming up next month, we decided to finally make it the pick and read it over two months.  We will meet to discuss 11/22/63 on the last Monday of November at 9PM ET in our Mom’s Book Nook group on Facebook!

All are welcome – to participate, just read the selection and hop on Facebook to discuss with us at the designated night and time. You can also follow us on Goodreads and Instagram.

So whether you are from a blue state or a red one, and regardless of who you plan to vote for next month, at the very least be well read on politics and history.  And hopefully, read beyond today’s headlines of Twitter feuds and scandal. Understand what political theories inform each candidate and the ramifications they may have for our country and our futures.

So curl up with a great political pick this Fall before you head to the polls. Happy reading!

Great catch! You are totally right, and my mistake! We read The Nightingale as part of Mom’s Book Nook earlier this year, and it has probably been the best book I have read in years, if ever. I love all Kristin Hannah’s work – she does such an awesome job writing real, strong female characters.

Now through Black Friday, save 30% off sitewide and let your little one unwrap the learning this holiday! Use code GIFT30 to save. You'll find Learning Resources toys all over our playroom shelves.

50% off all STEAM Kids ebooks

60% off First Month of KiwiCo - Any Line

KiwiCo, the makers of Kiwi Crate, and now Cricket, Koala, Doodle and Tinker Crates for different ages and interest, is offering 60% off the first month of any crate, for any line you choose. Offer ends 11/28.

For Gift Ideas (or YOU)

Start your custom curated monthly wine subscription service with Winc. Bottles start at just $13 each, and 4 bottles a month gets you FREE shipping. Save $25 off your first Winc box with code HOLIDAY25 from 11/22 - 11/29/2017.

Shop Beautycounter this weekend get the last of their amazing holiday sets and give the gift of safer beauty this holiday (don't miss the Clean Slate Charcoal Duo, the perfect stocking stuffer for the man in your life, and the Winter Jewels Palette for glowy holiday looks!). Shop with me, and I will reimburse shipping and send a special gift for all orders over $150 placed by 11/30.

Save 70% off premium canvas prints and 60% off everything else! Use Code: DoorbusterAff I get all my family photos made into canvases now by Canvas on Demand, and they are GORGEOUS! Saves on framing too!

Organize Your Life with Cozi

Get Cozi, the #1 organizing app for families, and get our 2017 Printable HOLIDAY PLANNERS - all for FREE! Three kids, two different schools, dance schedules, tee ball schedules, doctor visits, my editorial calendar... this is how I keep my life together. Sign up is FREE!