This project took some bravery on my part.  You may have noticed most of our activity posts feature Big M, with Lil’ M along for the ride.  Big M (age 4) is my rule stickler, takes direction well, and since birth, has possessed an incredible attention span.  Lil’ M (age 2) is more of my whirling dervish!  But I thought Process Art inspired by Pollock might be right up her alley… and she didn’t disappoint.  This is the latest in our Art History for Preschool series.

I was very nervous setting this project up.  To date, Lil’ M has never been allowed to freely wield paint indoors.  And in every activity she has painted, she usually creates as much art on herself as on the paper! But with winter temperatures settling in, and baby brother asleep upstairs, I decided it was time to pull off the band-aid.

To kick things off, I planned to read her Action Jackson

, a children’s book about Jackson Pollock creation of Number 1, his first drip painting.

However, Lil’ M has a one track mind.  As soon as I said ‘project’ and ‘paint’, that is all she wanted to do.  So the book was cast aside, and I put out the two-page spread featuring Pollock from our favorite The Art Book for Children, and let

her get to work!

I set up the activity on the playroom floor, laying down two lengths of white craft paper to serve as a drop cloth.  Then I put the canvas in the middle and the paint tray next to it. I used pom poms instead of paintbrushes to stem some risk of errant spatter.

I encouraged her to let the paint drip on the canvas, and throw a pom pom or two at it.  Lil’ M, fiercely independent at 2, created her own technique, featuring very emphatic stamping.

But, most important of all, both for channeling Pollock and for an uber-active 2 year old, she put her whole body into it! 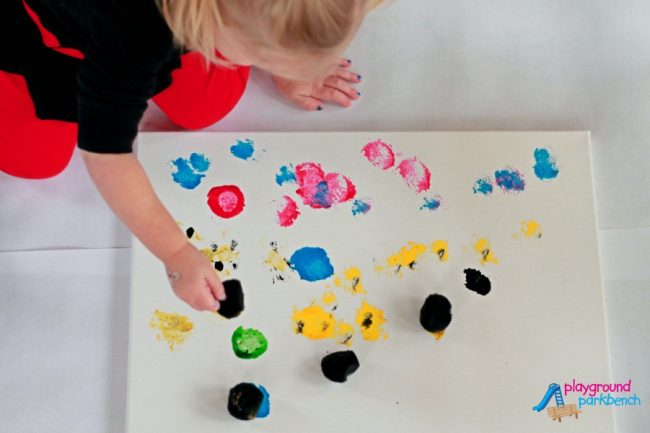 My fears and visions of paint everywhere were totally unfounded.  She painted with laser-like focus for a good 15 minutes, an eternity for her.  I had to watch to make sure she didn’t sit in the paint tray, and kept moving it to avoid disaster, but only because she was so concentrated on her canvas.  And in true Lil’ M fashion, when she was finished, she declared “I done!”  She stood up, held out her hands to be wiped down, and actually got very little paint anywhere else.

Anyone interested in a Lil’ M commissioned piece?  Her first work is family room wall worthy!

Jackson Pollock (1912 – 1956) was a famous American painter, and leader of the abstract expressionist movement.  His unique artistic technique – drip painting – is now world famous.  He obtained great notoriety and success during his life, and was patronized by Peggy Guggenheim, a wealthy heiress, NYC socialite and art collector. Posthumously, his paintings have been sold for as much as $140 million.  He died, at the age of 44, in a car accident while driving under the influence of alcohol, which he struggled with for most of his life.

If you enjoyed this post, be sure to check out two of our most popular Art History for Preschool activities: Elmer Meets Kandinsky and Painting with Scissors.  You can find all of these, along with the rest of our series on the Exploring Art History with Preschoolers landing page, as well as on our Art for Kids board on Pinterest.

Love it? PIN this image to save and share with friends!

[…] Process art is great for painting with kids, especially toddlers, because you just follow wherever the materials take them… and often the end result is better than anything you could have planned! […]