Preschoolers are natural scientists.  Their insatiable curiosity and inquisitiveness set the perfect stage for basic science experiments.  This week, Big M (age 4) and I are exploring science experiments with candy, featuring SweetTart hearts and custom My M&Ms for Valentine’s Day, but you can use any candy you have on hand.

Though preschooler’s natural curiosity is often enough to stoke their interest in science, a great way to hold their interest in learning opportunities is by using things they love.  And kids LOVE candy. To create our science experiments with candy, we used 3 different liquids, 2 different kinds of candy and these super fun, jumbo sized test tubes from Learning Resources

that are perfect for young scientists!

Setting Up Our Experiment

You can use any liquids and candy you like – this is much more about the process and making observations than the specific ingredients involved.  For our set-up, we used the following supplies:

Big M helped me prep our experiment by filling the test tubes with our liquid – we added each different liquid to 2 test tubes, one for each type of candy.

Next, we recorded our observations of both the different liquids the candy itself BEFORE we added it to our test tubes.  This of course included a little taste testing, as well!

She talked about the color and smell of each liquid.  I was confused at first when she said the vinegar smelled like rice, but then she explained, ‘like, you know, when we make the colored rice?’  And since we color rice with food coloring and vinegar, it then made complete sense!  It’s always amusing to discover the connection their brains make.

Then, we added the candy to each test tube, and made initial, day 0, observations.

Last, we let it sit for the weekend, and revisited our test tubes after 2 days to make final observations.

The SweetTarts had dissolved nearly completely, and she helped them along giving the test tubes a few shakes!  The SweetTart tubes’ liquids had become the color of the SweetTarts, and the M&M tubes had become cloudy and murky. The coolest observation we both made? We used Valentine My M&Ms, featuring black hearts, XOs, and messages printed on the chocolate candies.  The candy shells had completely dissolved, leaving just the chocolate.  But the printed black letters and hearts remained whole and were floating around in the test tubes! 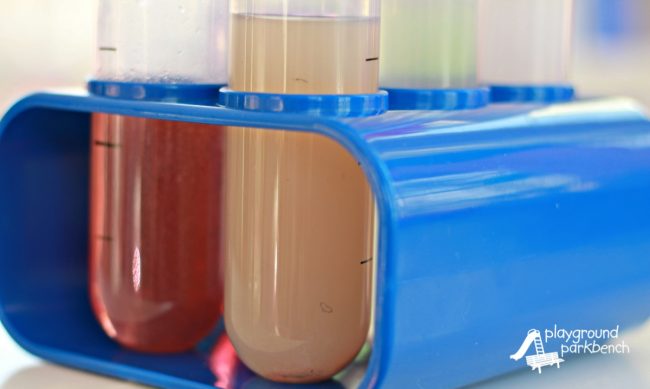 This basic experiment allowed us to explore a few different science topics, including discussion of dissolving, density and acids.

This post is my contribution to the weekly #KidBloggersofIG activity round-up.  This week’s theme is Science!  Check out #KBIGRoundUp for all the great science ideas shared this week, feel free to share your own, and follow me @PGPBMeghan on Instagram to catch the new theme each week, announced on Monday mornings, and my featured favorites, shared throughout the week.

Catch the latest in the #KBIGRoundUp feed below:

This message is only visible to admins

Big M is super excited to use our jumbo test tubes again… but it’s been oh, nearly 2 decades (ouch!) since this mama took high school Chemistry, so I’m going to have to start searching for ideas.  Anyone have any suggestions or ideas to share?  I’ll add them all to my STEM for Kids – Science board on Pinterest! If you enjoyed this post, be sure to check out Blowing Bubbles with Household Objects, a preschool exploration of the scientific method, or Top 10 Candy Science Experiments for Kids from Lemon Lime Adventures.

75+ Dates for a Date Night Jar

Make a Silhouette Portrait for Your Valentine

[…] in their Valentine box this week?  Instead of consuming all those little sugar bombs, you can make a great learning experience with them.  Big M has enjoyed two great activities this month using two different types of candy […]

[…] Heart candy science experiment. This is a great way to use up that leftover candy that you may not want your child to eat! […]