It all started in the dance class waiting room.  One of the mom’s was complaining about about the Disney Collector video’s on YouTube that her daughter had become infatuated with.  I had no idea what she was talking about – she showed me, Lil’ M (age 2) caught one glimpse and was instantly hooked.  While I was in the hospital having Baby M last Fall, she shared her passion for Playdough Princesses with Big M (age 4), and the two have been obsessed ever since… and soon after, they started begging to play Playdough Princesses themselves.

If you’ve never heard of the Disney Collector, according to some sources, she is the highest earning person on YouTube, earning just under $5 million in 2014… for opening and playing with toys and surprise eggs.  She has spawned a niche of followers and replicators, and inspired kids everywhere to want to make their own videos playing with toys.  It has certainly inspired my girls to ask for surprise eggs, and on a daily basis, to play Playdough Princesses.

And while you can buy Play Doh Princess

sets for $20-30 or more, I knew we could easily use the Magic Clip dolls

we already had at home and create our own Playdough Princesses for free.  Since the first time we played, this has been the most requested repeat activity in our house, EVER!

To play Playdough Princesses, you need two basic supplies: playdough and princesses!  To add to the fun, I also through in a handful of assorted sequins for them to adorn the dresses, and made several different colors of playdough.  I personally find homemade playdough to last longer and not make all the little crumbly mess that store-bought varieties make.  You can find my favorite playdough recipe here.

You can make one large batch of uncolored playdough, separate it into balls and color them, or make 4-5 half batches of the recipe linked above, and color the water as part of the process.  I find this makes the least mess and most vibrant colors. For these Playdough Princesses, I made four half batches and colored them using the McCormick Neon Food Coloring

.  Then, Big M said we had to have yellow too because Belle’s dress is yellow, so we ended up with a fifth color.

For some added festivity, during the kneading process, I added a few shakes of iridescent glitter to each ball of playdough too!

With the playdough made, I used my favorite Dollar Store sorting tray to hold the playdough, sequins for decorating, and Magic Clip dolls minus their dresses.

They played, and played, and played… until all the playdough was a jumbled, marbleized heap of all the colors and sequins.  The best part was listening them pretend to be the Disney Collector as they created their dresses.

They thought it especially clever that they could make stands out of the playdough, propping the princesses up. Any activity that occupies them for this long, and they ask to play over and over again, is a winner in my book!  And I’d much rather them pretend to be the Disney Collector than sit and watch her brainless YouTube videos… 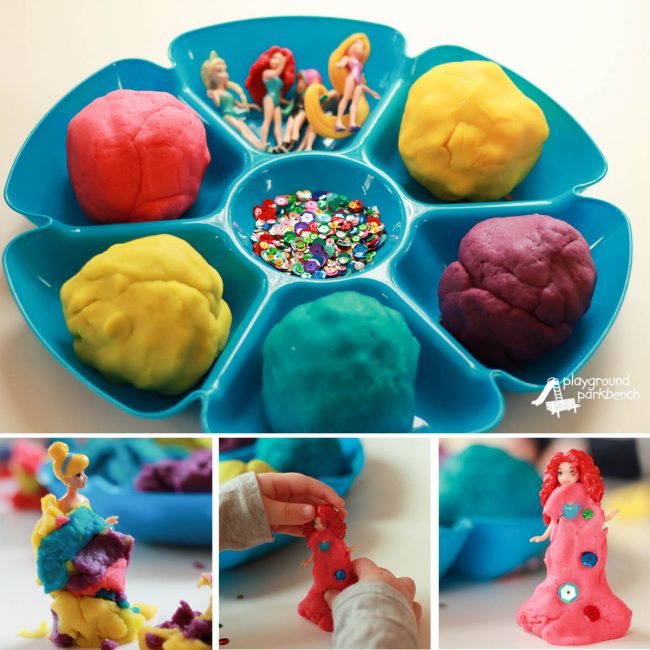 I’ve recently discovered that after the obsession with watching other people play with toys on YouTube extends beyond princesses and the Disney Collector, as my nephew watches people play Minecraft and open Star Wars toys.  Do your kids have a favorite creator on YouTube?

If you enjoyed this post, you might also enjoy Peanut Painting for Toddlers and my printable Princess Stationary!

Love it? Pin THIS!

Making Time for Me: How to Find a Babysitter

This is so cool Meghan,

My 3 yr old grandaughter loves princess. She also enjoys playdough. What a fun combo. Can’t wait to share with my daughter. I’m sure my 6 yr old grandson will want to get in on this as well! Thanks for the great ideas!

Aww, thanks! Make some red and blue playdough and he can turn all his men into caped crusaders! Thanks for sharing 🙂

LOVE this activity!! Great way to reuse toys and do something new with play dough!

Thanks so much – it is definitely a hit at our house, requested and repeated often!